Background: India has the world’s largest youth population despite having a smaller population than China. Adolescence is the main period for mental well-being growth and conservation. Mental illnesses affect 10-20 per cent of kids and teenagers globally. Ten per cent of children (5 to 15 years) have diagnosable psychological issues. All around the world,  depression is the 9th driving reason for disease and disability among all young people. Based on these contexts, the present study i.e., Adolescence Health Educational Programme(AHEP)  is carried out to assess the AHEP’s effectiveness in terms of improvement in the mental wellbeing of adolescents.

Methods: One hundred twenty, 9th standard adolescents were randomly selected and allocated to the intervention and control group (60 in each). The intervention group received  AHEP sessions for 10 weeks (about 2 and a half months). The mental well-being of both groups were assessed before and after  the intervention with General Health Questionnaire, Short Form Version 2  (SF 36 V2)

Conclusions: A consistent Adolescent Health Education Programme, in the long run, will improve and sustain the adolescents’ mental well-being

Research studies show the attainability and viability of coordinating mental health promotion interventions in education (Barry et al., 2013). The classroom environment offers a platform for promoting mental and social skills and scholarly education and offers a way of reaching a substantial number of teenage people with psychiatric problems (P. C. Shastri, 2009). However, Michelle O’Reilly argues that still there is a strong need for good evidence-based school health interventions for the promotion of adolescents’ mental well-being (O’Reilly, Svirydzenka, Adams, & Dogra, 2018).

Further, the existing school-based interventions were focused mainly on a few specific aspects of adolescents’ health and the evidence from India was limited. With this background, a PhD study was undertaken to assess the effectiveness of an Adolescence Health Education Programme (AHEP) on the health of adolescents studying in selected schools of Bangalore, Karnataka, India. The current study is designed based on the Indian context with comprehensive coverage of all the aspects of adolescents’ health. In this project, health was assessed in terms of the physical, mental, social and spiritual well-being of adolescents. In this article, the impact of AHEP on the mental well-being of adolescents is presented in detail.

A Randomized Controlled Trial design was used for the study. A multistage random sampling technique was used to select the sample for the experimental and control group. Bangalore consists of three districts such as Bangalore North, South and Rural.  Bangalore north was selected for the study by lottery method (Stage 1). Further Bangalore  North district has four zones like North 1, 2, 3 and 4. North 2 was selected by lottery method  (Stage 2). To keep the homogeneity of the sample, matching was done with the following characteristics of schools i. e. Private Aided, Secondary school, Coeducation, Location (Mathikere and Yeshwanthpur) and Medium of instruction (English). Bangalore North 2 zones form 190 secondary schools with various management such as the Department of Education, Government of Karnataka (11), Central government (03), Private aided (32), Private Unaided (138), and Local body (6).

Out of thirty-two private-aided schools (Stage 3), 29 schools have coeducation and 3 schools were only for girls. Locality wise there are six schools in Mathikere and Yeshwanthpur (three in each). Out of these six schools, three schools have followed English as the medium of instruction. In that one High school was randomly assigned to the experiment and another High school was assigned to a control group (Stage 4). Further sixty, 9th standard students from each school were randomly selected for the study through the table of random numbers (Stage 5).

Adolescents in the experimental group had received Adolescence Health Education Programme (AHEP) for 10 weeks. The adolescents were asked to fill the socio-demographic proforma and General Health Questionnaire Short Form Version 2 (SF 36 V2) before AHEP. AHEP has three components. First, an interactive teaching-learning session of 90 mins/week, which covers topics such as growth and development, healthy nutrition, HIV/AIDS and Reproductive Tract Infection, life skills, substance abuse, assertive communication, anger management and spiritual well-being. Second, meditation sessions of 90 min/week. Third, a structured physical exercise session for 90 min/week. After 10 weeks of AHEP, adolescents were instructed to follow the meditation and physical exercises on their own. Post-tests were conducted after the first and sixth months of AHEP. Control group adolescents were undergoing regular school activities. Ethical aspects: This study is approved by the Ethical Review Board  of M.S. Ramaiah Medical College and Hospitals, Bangalore, Karnataka, India.

Table 1 shows that more than half of the adolescents were 14-year-old Hindu, non-vegetarians. The chi-square test shows that both groups are homogenous in their socio-demographic characteristics.

Table 4 shows that Muslim adolescents are having significantly higher well-being, followed by  Christian and Hindu (F = 3.460, p=0.035), while other socio-demographic variables are not significantly associated with mental wellbeing.

The AHEP has significantly improved the mental well-being of the adolescents in the present study. Similarly, life skill training programme has improved the adolescent mental well being (Bardhan, 2016); a Sports-Based Youth Development Program was effective in improving mental well-being (Ho et al., 2017); Research studies conclude that the school-based improved mental wellbeing (Eschenbeck et al., 2019). However, in the present study, the MCS score of adolescents was above average, this may be because of the family structure in the study locality; these students are taken care of by their parents, so they may have fewer worries about the future, finance and other aspects of life.

This present study shows that there is a significant association between the MCS and religion and there is no significant difference between boys and girls in terms of mental well-being. A study conducted by Sankar R, Wani M A and Indumathi R showed the contradictory finding that there was a statistically substantial distinction between boys’ and girls’ mental health scores. (Sankar, Wani, & R., 2017) Dey M, Gmel G and Mohler-Kuo M conducted a study to find the link between Body Mass Index (BMI) and health-related Quality of Life. (Dey, Gmail, & Mohler-Kuo, 2013),(Dixon, Rice, Lambert, & Lambert, 2015). This finding was contradictory to the present study, where the result shows no association between the MCS and BMI.

Mental health problems among adolescents are of sincere concern. Unhealthy  Behaviours during adolescence represent major public health challenges. To achieve optimal adolescent health and well‑being, the planning of policies in health and allied fields should be multi-dimensional. School-based awareness programmes among young people need to be given prime importance, so that vulnerable adolescents are aware of their choices that form risky Behaviour. Mental issues have become one of the main problems that affect adolescents in their day-to-day life. As the psychological concerns of adolescents are more delicate and difficult to handle, proper measures need to be undertaken by the high schools to prevent mental health issues in the children.

To achieve mental health, measures should be taken to prevent mental disorders and to foster and promote mental health and wellbeing. Mental health cannot be carried out only if disorders are prevented or treated. We need to tackle the problems that hurt school children’s psychological well-being, such as vulnerability, drug abuse, poverty, violence, substance use, domestic violence, conflicts in the family and society, insecurity and ill health. The present study found that the AHEP has helped the children in developing the mental wellbeing of all religious backgrounds. In this present study, the parents were not involved, hence we recommend that the upcoming research needs to focus on the involvement of the parents in the programmes, as it may influence parenting habits and for the provision of a better home environment. The present study also suggests that the AHEP is replicable in a school setting and the mental health program in the school may be made most effective with AHEP. The teachers also may be trained as facilitators in AHEP. Frequent assessment of the mental health of the schools’ children may also be done. The findings and inputs may be given to the children to improve their ability and competency in the required areas. We conclude that a consistent Adolescent Health Education Programme in the long run may improve the mental wellbeing of adolescents. 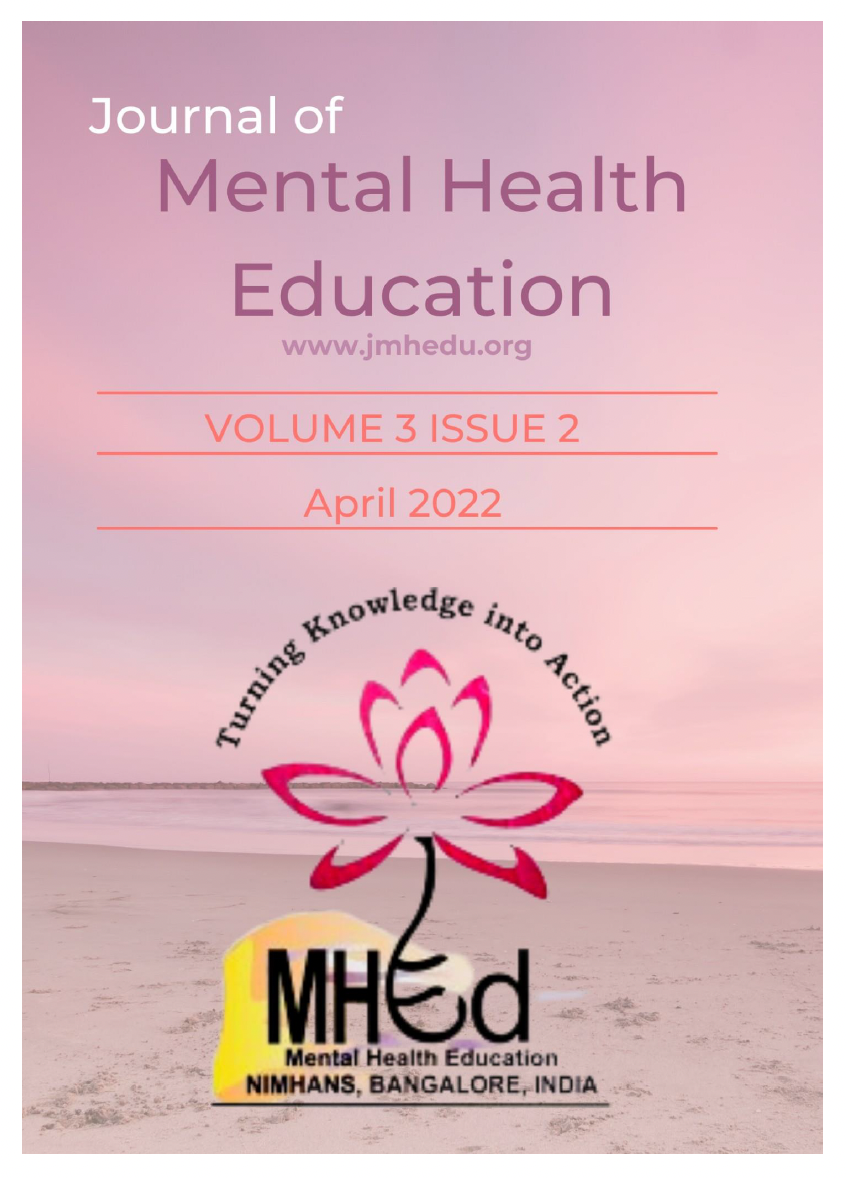